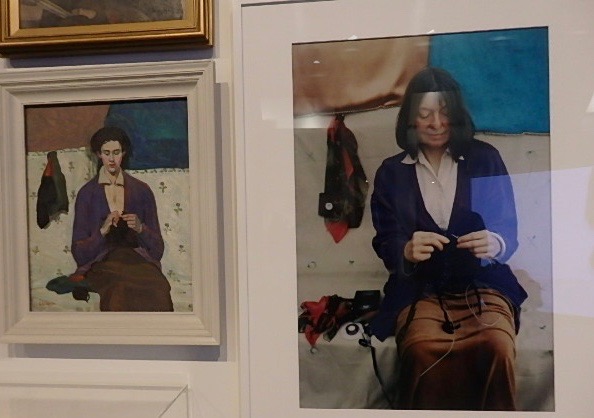 At an exhibition of work by Australian women artists I recently encountered an old friend from a poem of mine, “Grace’s sister eternally knitting that sock”.

Grace Cossington Smith’s painting of her sister knitting for the World War I war effort is a well-known Australian portrait with its own story. Hanging beside it in the gallery in Canberra was a reworking of that piece by Destiny Deacon, this time showing the artist Fiona Hall knitting one of her own artworks from a reel of video tape. Possibly that film showed footage of war, perhaps not. But the conjunction of the works brings out the connectivity throughout art and between artists, and reminded me of my poem.

The photo is from a mural of portraits at Know My Name: Australian Women Artists 1900 to Now, a fabulous show at the National Gallery of Art in Canberra. It’s a poor photo, I apologise to Destiny Deacon, I couldn’t control the light and its reflections in that busy public gallery, but it gives you a chance to see what I’m talking about.

I’d like to share the poem from sprinting on quicksand, and add a few pointers. I think the poem is best understood as four different reflections on art. It arose from a discussion many years ago in a group of Spanish speaking Australians. We used to meet to talk about Spanish language, literature and our own writing… and then we didn’t. In those days pre-Covid, how lightly we took our opportunities to meet or not to meet! Anyway, one day Miguel Cabezas contributed a poem reflecting on subjects being immortalised and/or stuck in painting frames and sculptures. I started thinking about that, and the following poem resulted. You can decide for yourselves about Grace’s sister, but I rather think she’s perpetuating.